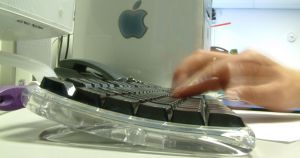 When it comes to graphic design, it's a buyer's market.

If you’re a graphic designer, you’ve heard the stereotypes: lazy, party-happy, energy-drinking, noon Happy Hour, and the most overpaid slacker on staff. At least, that’s how a lot of my designer friends feel they’re portrayed, despite the fact that most are conservative coffee-drinking early-risers with mortgages to pay and families to feed – and are, by and large, vastly underpaid. And while graphic design is an outstanding job to have for those who are passionate about it, it definitely comes with its own unique baggage every designer has to contend with. Here are the biggest problems facing graphic designers today.

There are more and more designers entering the market every day, and though a career in graphic design is often considered recession-proof (and the field is estimated to grow by 13 percent by 2013), heavy competition for design work from unqualified “designers” has created a buyer’s market. Thus, designers are forced to sell at lower fees and work for lower wages.

Some companies truly care about their images and are willing to pay for great design work. Some just want the job done as economically as possible. Overseas competition has traditionally served the latter, which deepens the price basement and lowers the ceiling along with it. The bigger problem, however, is that some of those overseas designers are getting quite good at design and are willing to work for far less than you are.

More small businesses just want the job done. For example, they just want to print a postcard that promotes their newest deal. If they can do it with a $20 template instead of paying you $1,500 for design, they will. Templates make it easy to forgo custom design in favor of a cheap and easy solution; however, they also represent an excellent opportunity for graphic designers. What if you sold that $20 template to 500 different people? You’d make $10,000 off the same design.

One of my biggest gripes about the digital age is that equipment that was originally designed to make work easier has also increased output expectations. If a computer lets you do in five hours what used to take you eight, shouldn’t you get off work three hours earlier? Not in today’s market; in fact, you’ll be lucky if you can fit everything in eight hours at all. Clients and employers want great design, and they want it fast, and in order to maximize your income you’ll have to work fast, often under several deadlines at once.

Perhaps the biggest problem good graphic designers face is that they’re undervalued, which means they’re underpaid. One of the biggest pitfalls many designers make is to charge what everyone else charges. I think this makes them appear average. That’s why I recommend charging more. It sets you apart as a premium designer, and it will also help you land the best clients. It will also solve all the other problems mentioned here, as you’ll have fewer projects to work on and less upper-tier competition, yet make more money. What other problems do graphic designers face?