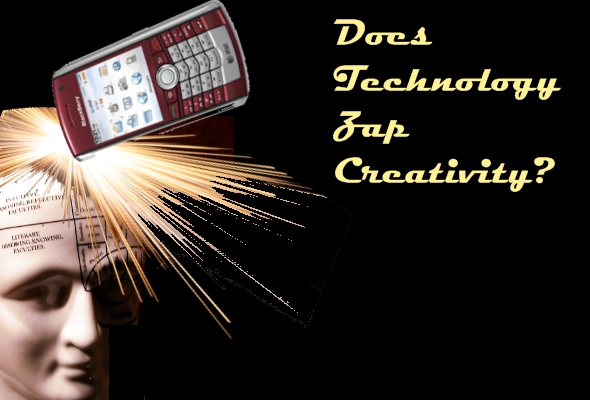 On a recent Bnet.com “Peak Performance” column, author Laurie Tarkan explores the research-backed notion that mobile devices zap creativity. The theory is that the quick-hit entertainment value of mobile devices eliminate human boredom, but boredom is a natural quality that enhances thinking and learning and thus leads to creative breakthroughs that translate into success. I'll take it one step farther: technology in general zaps creativity. As Tarkan notes, whenever you have downtime you can whip out your cell phone and check your email, watch YouTube videos, connect with Facebook “friends,” or play a round of Angry Birds. I postulate that you can also watch a quick Netflix or Hulu program on your television, play a round of tennis on your Wii or work on creating your best-ever iPod playlist. And, after all, Angry Birds can now be played on your laptop or desktop as well. The point is that technology has invaded nearly every aspect of our lives. Even those who “rough it” often depend on GPS navigation, rather than the mossy sides of trees, to get to their destinations. And when you can't get away from it, or refuse to get away from it, you have no time to reflect, think, plan or explore creative ideas that could change your life for the better. Edgar Allen Poe once quipped, “Man is now only more active – not more happy – and no more wise, than he was 6,000 years ago.” Though the enigmatic author made this statement in the 19th century, it seems prophetic in that it is more germane than ever in the 21st century. Technology has made it possible to do more with less; but we're expected to do more. It has not made life easier, only busier. Now, please don't take this as my shunning of technology. I, too, love my iPod playlists. And I'll bet I could beat your Angry Birds score. But I also know it's important to take advantage of downtime and allow boredom's interlude in order to realize a more efficient, productive, and happier life. Tarkan lists several ways to do this on her Bnet.com column. For my part, I like to lounge on the patio swing or drift in the pool – simply being, for even a short time, with no immediate purpose will free your mind to wander. When it returns, it will bring with it clarity of purpose and priority – and, perhaps, an ultra-creative million-dollar idea.