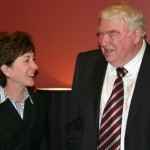 When I opened my new Nintendo Entertainment System (NES) back in 1987, I could not have fathomed that a plumber named Mario would spawn a new era of video games that grew in complexity and popularity to earn the huge fan base games such as EA Tiburon's Madden NFL enjoy today. Now the game that bears Super Bowl-winning coach and former color-commentator John Madden's name is arguably the most successful franchise in video game history . How did this happen? Pure genius, both from EA Tiburon and John Madden himself.

Here are the three decisions that branded John Madden NFL: 1. As the story goes, when EA first approached Madden in 1989 with the game concept. The development team was working on a football game with six or seven players on each side of the ball. Madden insisted on 11 players, and refused to allow his name to be used unless the game was realistic. Madden's insight was brilliant, and the games in the series have been widely regarded as the most realistic in football video gaming – and this strive for realism has played a major role in the game's popularity. 2. EA Tiburon then realized that the NFL has new players every year, and that the video game industry has new technology to play with every year, and so the company melded the two to create a franchise that could release a new game version each and every year without diluting its customer base. By adding the NFL's newest rookies, latest roster changes, and infusing them with new game play features, EA created a product with customers that purchased each updated version year in and year out. 3. EA also secured exclusive licenses with the NFL and the Player's Union to make Madden NFL the only “authentic” NFL video game series. Already incredibly popular with gamers, Madden NFL became even more popular as competitors dropped off or were unable to compete in the realism category. Everyone wants to play as their favorite team or player; only Madden NFL can offer that luxury. John Madden might be a gridiron coach and broadcast legend, but his name is also synonymous with video game football. It is the highest revenue-generating video game series in North America. It has inspired television shows and competitions between celebrities, athletes, football fans and gamers worldwide. Today, nobody asks if you want to play some video game football. They ask: “Wanna play some Madden?” That's branding genius.