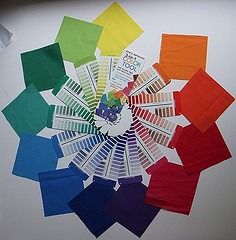 If you haven't done so already, you should study color psychology in marketing. It's quite amazing how colors motivate response. It varies among consumer demographics, niche markets, cultures and many other factors.

For example, there's definitely a reason blue is often used on e-commerce websites: It's thought to create a credible, trustworthy environment. Reds and yellows are found in many fast food restaurants, because they're thought to encourage customers to eat and run. Once you've ... ahem ... digested as much color psychology theory as you can stomach, throw it all out the window. Knowing the theories and practicing/testing them is good, but breaking the rules is always better. It isn't difficult to find out that Heinz made $23 (MILLION???)  off of a green ketchup campaign — not because the ketchup was green, but because it wasn't red. It was out of the ordinary, so it attracted attention. This is the ultimate lesson of color psychology. If you give people what they expect, you're unremarkable. If you really want to motivate response through your designs, give them a captivating surprise that intrigues. They'll respond, because they'll want to know more. Image CC license Flickr.

View all post by Brian Morris
How Much Money Do Nonprofit Mailing Postcards Save?16 fonts for Thanksgiving designs