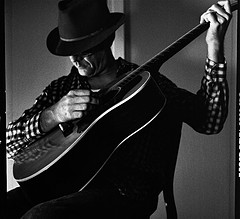 Until about 18 months ago, I never played an instrument; and at no time have I ever considered myself a musician. Growing up, music was not important in my home — reading books was. But about a year and a half ago, I picked up the guitar for the first time and set to annoy my family by mutilating great works such as “Bobby McGee,” “Bad to the Bone” and “Santeria.” Stevie Ray Vaughan would have rolled in his grave had he heard my ear-splitting rendition of “Pride and Joy.” And then, around six months ago, something interesting happened. I got better. My chords began ringing with clarity. My solos began to actually resemble the songs I was attempting to play. My family began gathering 'round the guitar — and I even inspired my 5-year-old to pick up a guitar of his own. I'm by no means “good,” but it's fair to say I can now slide my way through the “Santeria” solo without inviting the neighborhood dogs to serenade one another. And I realized something: My journey to guitar rock stardom correlates with business, especially freelance business. You see, freelancers start out the same way: They have an idea, and while they might be great at a specific skill, they're often not that great at operating the business side of things. As you move along your journey to building a lucrative business, you have to constantly keep at it, honing your skills and inventing ways to do things better. Just like the guitar (or the drums, the piano, the harp, you name it). Practice makes perfect. Some would-be guitarists want the gift of music to come naturally, just like some freelancers want the gift of a successful business to just happen. It won't. Persistence and practice pay off, and if you work hard to learn the intricacies of your instrument, or your market, you'll get better and better. Eighteen months ago, I couldn't even pick a single string (I'd hit three or four). Now, I can create my own solos; neigh, my own songs, because I've learned not just to mimic online tutorials, but the mechanisms of music theory such as root notes, modes, scales, back notes, progressions and other essentials. If you know your business as well as a master musician knows his instrument, then you can go from a laborer to an innovator — and innovation is where the real money is.