Throw out all the rules – the art of the calculated risk 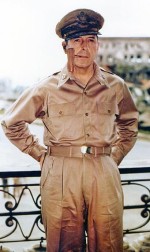 “You are remembered for the rules you break.” - General Douglas MacArthur Ask any mega-entrepreneur – Gates, Ford, Jobs, Trump, McMahon – what the ingredients to success are and they'll all agree on at least one thing: You have to take risks. Break the rules, because they're made to be broken. Anyone can follow the path to modest success, but it takes a revolutionist to eclipse even the most astute business people and change the world forever.

Certainly none of this is news to you. You undoubtedly know that taking risks can yield enormous gain. But does the fear of failure keep you from realizing your potential? While rebranding a corporate identity might not carry the far-reaching risks of orchestrating Operation Cartwheel, it is something that can make or break a designer's career. When it comes to taking risks in graphic design, there are two fears: 1) that an idea will be deemed inadequate and will fail at the drawing board; and 2) that an idea will be deemed incredible and will fail in practice. The latter is worse, because few will remember when a designer's ideas have been tossed before money has been invested. A failed public campaign backed by tens of thousands or even millions of dollars will resonate for years – even decades. Despite these fears, every designer has faced the situation when a client wants something done one way yet believes it will work better another way. You don't want to anger your clients by wasting time on designs they do not want, but you want to make a name for yourself by designing the image that carries the brand for the next decade – the next century. You can negate these fears with a simple approach to taking intelligent risks:

“I don't like to fail. I hate to fail. But I'm not afraid of it.” - WWE Founder Vince McMahon Image use from Wikipedia, http://en.wikipedia.org/wiki/File:MacArthur_Manila.jpg