Why Graphic Designers Should See ‘Beginners’

Mike Mills’ recently released “Beginners” has been buzzed about for its unique storyline of a father coming out as a gay man when he’s in his 70s. But there’s a subplot that should appeal to creative professionals: The septuagenarian’s son is a graphic designer, and the semi-autobiographical film itself is written and directed by designer Mills. 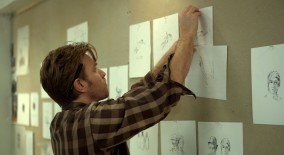 Ewan McGregor stars in “Beginners” as Oliver, a graphic designer whom we see in various stages of his life: as a youngster on outings with his mother, five years ago when his mother passed away and his father came out of the closet, and in the present, as Oliver grapples to take on his father’s beloved Jack Russell terrier, enters into a new relationship with a free-spirited actress, and struggles to please clients at work while maintaining his own visions. Plenty of articles have been written about the gay storyline of “Beginners” – one of my favorites was this interview in which Mills discusses just how true the story is to his own life – but what also piqued my interest was that it’s a movie written by a designer about a designer. I’ve lamented before about the lack of graphic designers as main characters in film and television. But finally, in “Beginners” we see a graphic designer in action, as Oliver sketches ideas for agency clients and faces criticism when he presents his big, bold visions. “Beginners” addresses what it means to be a creative pro who has to find balance in coming up with unique ideas that also appeal to customers – when thinking outside the box isn’t necessarily celebrated. “Beginners” is a visually entertaining film – it’s obvious it was directed by someone who started off as a designer. Mills uses vintage advertising, doodles by both him and McGregor as well as photographs to provide a sense of time and place. He shows how someone who can be so uncomfortable with real-life relationships can gain confidence when immersed in a design project. And he makes a conversation about an iconic design such as the rainbow flag seem more natural and not at all preachy. (For an in-depth interview with Mills’ past, present and future as a designer, I recommend AIGA’s article.) If you’ve been wondering where all the designers are in the movies, definitely check out “Beginners.” Image via Focus Features.