A Painter, a Founder, an Organic Tea Seller

Reem Rahim bears the stereotype of the small-business owner of wearing many hats. As co-founder with her brother Ahmed Rahim of Numi, an Oakland, Calif.-based tea company, she is also creative director. The 10-year-old business has grown to about 35 employees and continues to expand its line of organic teas as well as serve customers in the Numi Tea Garden. Rahim and I sat down this week and discussed her role at Numi over steaming mugs of chai. 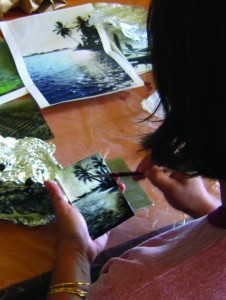 On starting a business: “I started a business because I am an immigrant, and I was told to do something stable,” says Rahim, who was born in Iraq and moved to the United States in 1971. “One of the reasons was I wanted to do something my parents would be proud of, but I also had ideas.” Rahim, who had become an engineer, says she was miserable in her career and had always taken art classes. “My father said to choose one thing” to focus on for a business. Oddly enough, when Rahim told her brother, Ahmed, that she decided to open a tea business, he said he had come up with the same idea based around “numi,” a lime tea they drank in Iraq. Running a green business was very important to the siblings, as seen in their fair-trade tea, biodegradable tea bags, recycled packaging and carbon-offset program. On creativity in the workplace: “My artistic sensibility really created the brand,” says Rahim. “And people love our packaging.” Each box of Numi tea has a different picture, which Rahim often paints them based on her brother’s photography. The look, tone and feel of all the packaging was created by Rahim. Being artists influences how the brother and sister do business. “Artists are ultimately visionaries,” she says, “so we see outside the box – we see things different.” Though Rahim had taken art classes all her life, she didn’t have graphic design experience when she co-founded Numi. At that time she collaborated with a designer to put together the company’s materials, and since then Rahim has taken design classes herself. Now Numi employs a vice president of marketing, who manages a handful of staff, as well as two in-house designers. On the future of Numi: “We want to grow – the sky’s the limit!” says Rahim, as Numi crosses the 10-year mark of being in business. “We’ve learned so much about human resources, budgets, etc. And we’ve been branching out by developing our nonprofit.” Personally, Rahim says she’d like to scale back on the day-to-day responsibilities to avoid burnout and to focus on her art as well as the nonprofit arm of Numi and the social and environmental causes it supports. “We didn’t set out to make money,” Rahim says. “And I don’t think we’ll ever stop trying to make the world a better place. With a soothing cup of tea, you feel like a whole person.”

View all post by Jennifer Moline
3 Ways to Repurpose Vacation PhotosPrint marketing: 7 benefits to leverage in your business

[...] 7. Buy local. Seek out farmers markets so the produce doesn’t travel as far to get to you. And don’t be afraid to ask those companies you patronize about their sustainable practices. [...]