Designer Rolls the Dice With His Gaming Maps 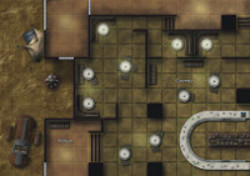 Every once in a while, we here at PsPrint come across an order that makes us think, “What the heck is that?!” Such was the case when we came across this map that looks like “Clue” meets “Star Wars.” I contacted the map’s designer, Matt Francella, to chat about the inspiration for his maps, his self-taught design skills and how Kickstarter helps fund his projects. “The maps I create are actually ‘gameboards’ used for traditional role-playing games and miniature games,” Francella told me. “Some of the maps are based on iconic locations from other movies, video games, books, etc. Some of them are from my own imagination.” Most of Francella’s maps can be used for “Star Wars Miniatures” and “HeroClix,” he said, and all of them have general usage for modern and sci-fi role-playing games. Francella says when he was a child, he was interested in “Dungeon & Dragons,” and despite being too young to understand the rules, he loved the idea that “you could create your own world and make maps with graph paper.” Later in life, Francella really into gaming to help pass the time when he was a Marine on deployment. 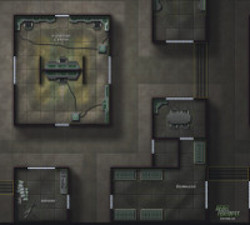 The other side of Francella's latest gaming map.

“I started playing some miniature games later in life,” Francella said, “and it started to spark my imagination. These games came with their own maps, but I started to draw out my own maps again. The more involved I became with it, the more I wanted to improve the quality.” Francella taught himself to use graphics software, and over time he shared his maps with the gaming community as free downloads. “The demand became so great for them, I decided to look into actually printing the maps and selling them,” Francella said. “It has become quite successful!” Despite his design skills, Francella has no formal training in art or design – in fact, he’s currently in nursing school and works at the Naval Hospital in Portsmouth, Va. “But I learned a lot about design working with different designers,” he said, “getting advice and tips from other great artists and, most importantly, getting input from different gaming communities.” Francella is one of a growing number of creative folks who is using Kickstarter to help fund his projects. “We have used it twice in the past year and a half to raise money for projects that we were, quite frankly, not sure how we were going to pay for something,” he said. “It's given my projects exposure that I don't have the time or resources to promote myself. I love the idea that talented people with great ideas have a public forum where they can help make their ideas and dreams come true.” Most of Francella’s maps are available at Miniature Market, and he tries to update his blog when he finishes new projects. About the Author: