Interview: Print and Design Before Computers

I recently came across a quote from renowned graphic designer Milton Glaser: "The computer is to graphic design what the microwave is to food." This quote got me thinking. It made me wonder what graphic design was really like in the days before computers.

Do computers just speed everything up, or do they dramatically change the design process? Did Glaser intend a negative or positive connotation when he compared computers to microwaves? To find out more about design before computers, I called up Chuck R., a friend and colleague of mine, who specializes in print production for high-end photography and design publications. Chuck and I worked together at a photography and design publisher in New York. I knew he had also worked in studios during the 1980s, before computers took over the design field. Below is the resulting conversation I had with Chuck, where he discusses the potential meaning of the Glaser quote, and what design and printing were like before computers … when designers had to put files together the old-school way.

Britt: What do you think about Milton Glaser's statement that "The computer is to graphic design what the microwave is to food?" Do you think it's true? Chuck: I think there is a certain kind of truth to that. If you think of more "old fashioned" design, it's where the designer would sit down at a drafting table and basically be faced with a blank piece of paper, like a writer who was just starting out, and build from there with their tools. The microwave isn't for cooking, it's more of a way to warm something up that's already been cooked. Using the microwave, it's not starting from scratch so to speak. It's almost like a rap artist or somebody that samples a song that already exists and changes it slightly and makes it theirs.  I think the computer can sometimes fall  into that trap, where designers sort of sample a little bit from something that already exists, and then use the computer like a microwave to sort of warm it up and change it and get it ready for consumption by making it a little bit more their own. Whereas with old fashioned design,  you didn't have that resource. With each job you had to sit down at the drafting table, and look at what the client wanted and consider the best way to start from scratch each time and come up with a design that was acceptable for the client. Britt: Do you have a microwave? Chuck: Yes we do! We use it for things like potatoes and popcorn and warming something up from the refrigerator. I mean when I thought of the Glaser quote, I was trying to think if we ever use the microwave to really cook from scratch, where you start with nothing and end up with a meal, and I don't think we've ever done that. I  really think of the microwave as dealing with something that already exists and maybe modifying it by heating it up or adding some spices to it. But I don't really think about cooking from scratch with the microwave. Britt: How did book design and printing work before computers? What was the process like? Chuck: There used to be kind of a division of labor, where certain people had better skills at one activity then some of the other people in the studio. Nowadays the computer is the skill and the designer has all of these wonderful tools to take a design from step one to completion without having to hand it off to someone else. Britt: Can you explain the division of labor and all of the people and steps involved? Chuck: There used to be a designer that was very good with the rapidograph for instance, so they were almost an artist in the sense of the lines they would draw, where the rule was and whether it was a certain size. And there might be somebody else that was very good with a photostat camera, and they would make position stats to indicate the exact cropping, and the size and position of the images on a page. Maybe somebody else was very good with the mechanical boards in terms of paste up and using rubber cement and getting photostats pasted down onto the page layout exactly where they needed to be. 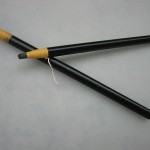 Nowadays those functions are all sort of internalized in the computer in terms of software that's available to everybody. So one person can draw a perfect line, resize and move and change position of an image on a page layout on a computer and so much more. Whereas in the past, you had to speak to a certain guy in the studio that was really great at working with a stat camera. And you'd go in and mark-up a transparency that had a sleeve on it with a wax pencil or a china marker trying to indicate how you wanted the image to be positioned. Then he'd take that into the darkroom with the stat camera and come back out with a photostat and you'd look at that photostat and give it to somebody else to paste down on the mechanical. Then if there was a rule, for instance, that had to reproduce on the page, it might even go to another person with a rapidograph who would change the rule size. So all of those little jobs or functions the computer has put altogether so that one person sitting at a computer can easily do all of those functions." Britt: This question really reveals my age, but how did you get the files to the printer? What did you send them? Chuck: The printer actually got a mechanical, and each mechanical would represent a page in the book and would be to size. So if you were working on a 9.25 inch by 11.75 inch book, that mechanical would be that size and on a cardboard or a stiffer paper. You would actually have these photostats that were pasted down onto the mechanical that would indicate to the separator exactly the size, the placement and the position of each image. And let's say there was a rule that reproduced on a page, it would be drawn as a hard rule, right on the mechanical around the photostat. And if there was type, it had to be sent out to the type place, and you would get photostatic type art back and that had to be pasted down exactly to size and where it was supposed to reproduce on the page. For a 500-page book, there'd be 500 mechanicals, and they'd take a picture of each of those mechancials, and then they'd take the transparencies or the flat art and have to scan it. Then they'd get four pieces of film back from the scanner for the magenta, yellow,  black and cyan -- each of the four colors, and then they'd have to strip all of that up for different layers to match that mechanical. So each of those 500 pages had physically four sets of film that would then make plates that you could make proofs from. The color ink proofs would go back to the client, and the client would make corrections and changes and then the designers would have to start all over again: revise that mechanical, maybe make a new photostat if the positioning was wrong, and send it back to the separator. They'd rescan the same image but at a different percentage, redo the film, redo the plates and send another ink proof back. It was incredible the kind of labor and steps that went into that. It was all film and it was very very different. 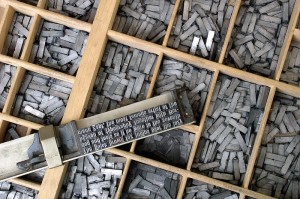 Britt: How long would it take to lay out one page of  book design then verus now? Chuck: Before anything was sent out to the printer, I would say easily it could take a couple of hours to get the photostats made, to get them into the studio, get them pasted down, to get the type back from the typesetting house and get that pasted down, so let's say it's a three-hour process. Now with a computer you could probably do that in 15 minutes. Britt: How about adjusting color? Is that much easier now? Chuck: We used to work on an actual paper proof, and we would make indications to the separator that we would want to reduce the magenta here or bring the cyan up there to adjust the color in that way. So they'd go back and do that work, and then we'd see a revised proof. Nowadays you can just do that right on the screen you don't need to send that out to see a proof. The proof is right in front of you on the screen and you can adjust color, and if you have a decent printer in your studio, then you can print out a proof just to get sort of a base reference, and then change that file, print out another proof and see how that changes. It's so much more instantaneous. Britt: Do you think design students today should try doing a project using any of the old techniques? Chuck: I honestly don't think so. Nobody should necessarily go back and do that. But I guess in terms of type being set in metal type, letter-by-letter-by-letter, for a student I think that kind of thing can be very important in terms of seeing where everything's come from.  And typesetting is still certainly a skill or a passion that somebody might have. But just in terms of getting the job done,  you don't want to go back you want to keep going forward.

That's exactly what I see the most around in the designers midst...

All those steps back them had some method to it, and when you hat to explain to someone else what you wanted, you had to think and rethink your idea, even without some critic from a coworker, you'd do it yourself.

Since the computer is rushing things, so people are rushing the delivery, when they should do exactly the opposite, the extra time should be spent invested in the intelligence work, planning, briefing, mind-mapping, roughing, etc. to deliver a real different and, most of all, tailor-made-right-on-the-spot_bulls-eye solutions concerning client and audience...

Another downside is that the software interface guides you into doing things always the same way, specially adobe's, which puts the designer inside a rigid plastered cast. A pencil and a moleskine would never do it.

It's not ethical for a designer to charge for his brain skills when he's relying on the computer to do it for him while the actual brain skills are asleep.

So we must keep an eye on how things were done so we can move forward more efficiently and ethically...

I'm bloggin' about this too. Can I post a link on my blog? And do you know when Milton Glaser said this?

Focusing on the 'substitution for experience', he meant real touching of art tools, and hand work. I can see how he'd water this down with the sexual harassment policies of design schools (and the country) now ...but back in first days of computers, he used to tell it this way.