Propaganda-Inspired Design in Honor of May Day

May 1, known as May Day, is a day recognized for international labor movement celebrations. May Day became a huge holiday when in 1886 several workers and police were killed during a Chicago worker's rally in Haymarket Square. After the riot, the courts tried several men who also held controversial political beliefs, and hung seven who were seen as martyrs from then on by the labor movement. May Day celebrations have since been taken up worldwide to promote workers' rights and other movements.

The aesthetics of vintage propaganda posters -- retro airbrushing, block fonts and eye-catching illustrations with deep colors and dark woodcut-like lines -- translate really well into current graphic design projects, including promotional postcards, posters and even invitation cards! Here is a round up of propaganda poster links to keep you inspired when coming up with design ideas for your projects: 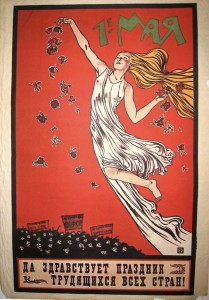 This image above combines the May Day traditions of celebrating fertility (i.e the Maypole) with workers' rights. It is taken from the Holt Labor Library's website, where you can read about the history of May Day. The above image is a Cuban May Day poster, circa 1965, from the International Institute of Social History's website. There is a collection online called "The Chairman Smiles," showing almost 150 striking examples of Cuban, Chinese and Soviet propaganda posters. You can even order postcard versions of your favorite designs.

This 1932 Soviet poster above urges laborers to fight for safer work environments. You can learn about this and other Soviet propaganda posters on the International Poster Gallery's website. Abuzeedo.com also has a gallery of 47 great Soviet propoganda posters.

This is a 1967 Black Panthers poster, which is discussed in an article on AIGA's website, called "Red All Over: The Visual Language of Dissent." Another great resource on the AIGA site, is an interview about political and propaganda posters with accompanying images found here.

View all post by Britt Brouse
How Much Money Do Nonprofit Mailing Postcards Save?8 bike sticker designs for the summer