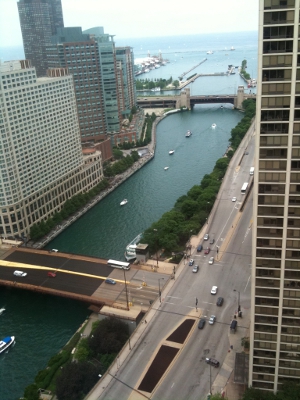 A hotel room with a view. (photo by Ken dela Cruz)

With more than 2,500 people in attendance, HOW Design Live 2011 in Chicago this past weekend offered graphic artists the opportunity to learn, network and even win some iPads. PsPrint was there – in the booth, in the classrooms and even at the microphone. PsPrint sent a four-man team to the Windy City: designer relations manager Piankhi Williams, creative manager Ken dela Cruz, product manager Paul Walker and vice president of sales and marketing Dave Lessing. If you stopped by PsPrint booth No. 214, then you may have chatted with one of these gents and entered to win one of two iPads we gave away. The PsPrint booth had more than 450 entrants in our raffle, with Jennifer Jones of Mount Pleasant, Mich., and Kendell Chambers of Atlanta each winning an iPad at the show. 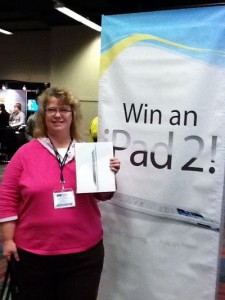 Jennifer, a graphic designer with the nonprofit Ziibiwing Center of Anishinabe Culture and Lifeways, said this is the third HOW Design Live conference she’s attended, and she’s always looking to learn about design trends, hear from industry experts, network and find out about new technologies and products. Sure enough, Jennifer reported that she came away with the awareness that as people lead busier lives, their attention spans are diminishing, and audiences these days may look at a design and decide in just nine to 18 seconds whether they are interested in learning more. “We must design for the new audience,” Jennifer learned. As designers scramble to create for that new audience, they’ll be pleased to learn that there’s a way to make their previous work earn additional revenue. PsPrint designer relations manager Piankhi led a session at HOW called “Making Your Designs Earn Extra Cash,” in which he explained how PsPrint’s new Design Marketplace works. “In addition to their feedback that the Design Marketplace was a great idea and opportunity to benefit from repurposing existing designs to earn extra cash, they were also excited that they would be in control of all aspects of their template design creation, unique designer profile, commission structure, communicating and promoting,” Piankhi told me. Did you catch his session? We’ll be posting it online soon, and in the meantime, why not explore the Design Marketplace invitation gallery. Once Piankhi stepped down from the microphone, he got a chance to mingle with conference attendees – designers who came from all around the United States and even other countries. “Designers that I spoke with were diverse and at different stages in their careers,” Piankhi said. “From just out of college, looking for a design job, freelancing and working for a company or firm to owning their own design company or firm.” 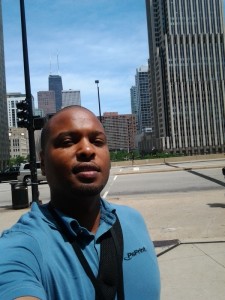 While Paul manned the PsPrint booth, Ken went to school, soaking up knowledge in sessions such as “From Firefighter to Strategic Partner” and “How to Turbo-Charge Your In-House Team,” the latter where Ken learned the term “hacktivism: People will hack whatever you design or create.” Ken also really dug “Purpose vs. Responsibility: How Your Design Prowess Balances the Two,” in which graphic artists were taught to believe in their designs and not back down, because they are experts. HOW Design Live wasn’t all about design education – Paul and Ken did manage to pay a visit to the Field Museum, while Piankhi shopped downtown, took in towering skyscrapers such as the John Hancock Center and indulged in a Windy City mainstay: “A grilled hot dog, slice of pickle, tomatoes, onions and mustard made for a very tasty slice of Chicago!”