Belle of the Ball – and Her Business: Interview With Jill Tracy

Decade-long PsPrint customer Jill Tracy wears a lot of hats: composer, pianist, singer and storyteller, for sure, but also promoter, booker, manager and stylist, among others. “I have always done it all myself,” the San Francisco-based artist told me during a conversation ranging from Tracy’s music exploration to her marketing tactics. 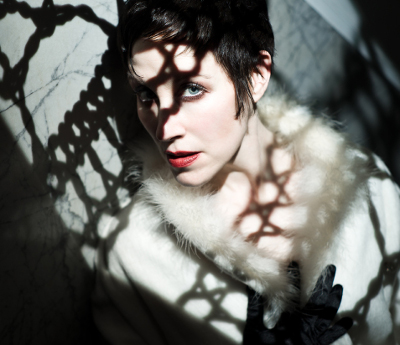 You may know Tracy’s music without even realizing it – Showtime asked to use her song “Evil Night Together” to promote the final season of “Dexter.” However, my first introduction to Jill Tracy was a few years ago in San Francisco at the Edwardian Ball, where she is hailed as the “Belle of the Ball.” For the uninitiated, the Edwardian Ball – held every year in Los Angeles and San Francisco – is “quite the spectacle,” said Tracy. Drawing thousands from around the globe, the combination dance-theater-art show celebrating the late writer and artist Edward Gorey is “a total experience. It’s like a deranged Disneyworld,” Tracy said. “I've played some very legendary events – like Anne Rice's Halloween ball in New Orleans – that don't hold a candle to the Edwardian Ball.” Tracy’s music, which could be described as neo-cabaret, fits right in at the ball. 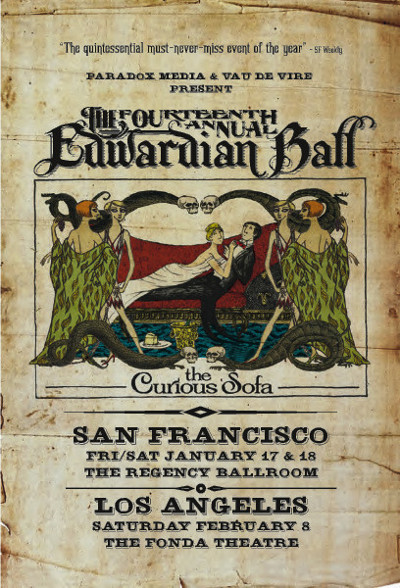 Club card flyer design by Buck Down for Edwardian Ball.

Club card flyer design by Buck Down for Edwardian Ball.

For such atmospheric, dark-carnival music, one would expect promotional materials to reflect that, and Tracy delivers, as evidenced by her most recent postcard: 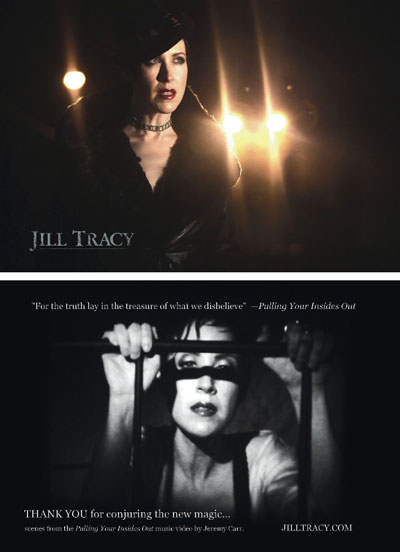 Front and back of postcard for Jill Tracy.

Tracy is adamant about having some form of take-away at all of her performances. “I always have really nice two-sided photo postcards with my contact info,” she said. “So when people walk out, they can take this pretty card and wake up the next morning with my info intact. I'm always baffled when people ask how they can find me. Having something you can stick in their hand is so key. Stickers and buttons are nice, but giving something away that doesn't have contact info – at least a URL – is bad.” Postcards aren’t Tracy’s only print marketing tool. Last year, to accompany her Christmas album, “Silver Smoke, Star of Night,” Tracy decided she wanted an interesting piece of packaging, so she worked with artist Trista Musco to create a holiday card. When ordering the CD on Tracy’s online store, fans requested personal inscriptions for the card – either for them or to gift to others. 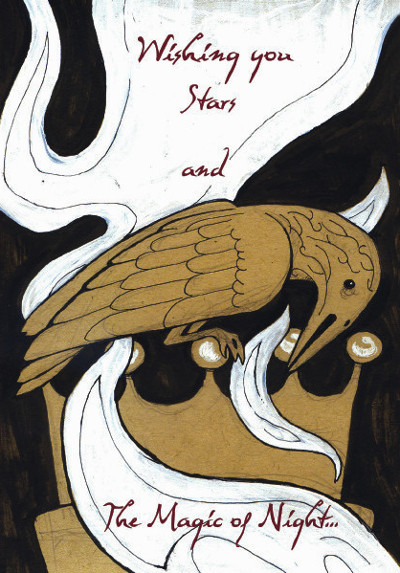 “They were a hit!” Tracy said. “It was so fun, because I'd learn so much about my fans as they requested inscriptions. It was a great opportunity to be intimate with fans. I'll be doing that again this year.” An even more unique promotion Tracy does is signature perfumes created with Nocturne Alchemy. Musco, who illustrated the “Silver Smoke, Star of Night” cards, also worked on the hang tags for the perfumes. 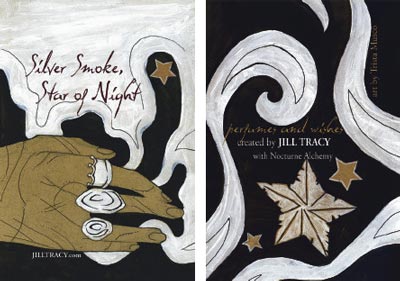 Front and back of hang tag art by Trista Musco.

Tracy noted that with everything going digital and CDs not selling the same way at all, musicians have to rethink: How do I make money? What do I sell at a show? San Francisco Bay Area perfumer Emerson Hart is a fan of Tracy’s music and had approached her last year about collaborating on a scent – now there are four. “The perfumes were an idea I had by being inspired by the full sensory experience I strive for in my work,” she said. “The sense of smell is often overlooked, but the limbic system is directly related to emotion and memory. I thought it would be really powerful to create these scents to enhance the mood I create – 'Night Fragrance for Night Music.'” While Tracy says she loves working with other independent artists and photographers, she also produces her own marketing materials. “Often I design my own cards,” she said. “I've had to kind of learn Photoshop and enough about graphic design so I can be as self-sufficient as possible.” While being an artist is a full-time job, Tracy juggles a number of other roles at the same time. “Being a musician is such a small percentage of what I do. I’m also manager, promoter, booker, stylist … I laugh as I'm booking airline tickets, creating newsletters, sending press releases, and I realize I haven't rehearsed!” So how does Tracy maintain a semblance of sanity? “It's not optimal – it's a struggle, but you do it because you love the work,” she admitted. “I would say that this life is certainly not for everyone – a sense of madness and abandon is required. But in the case of most artists, a bit of the madman is already present. “We get addicted to the roller-coaster chaos, the adrenaline rush from the constant push, adventures, both good and bad. There is a tragic beauty in this existence. Being so close to the edge at all times, but not falling over. That's the perfect drug.” What keeps her sane, Tracy told me, is working with other artists and projects that are NOT related to the music, whether it’s in Nocturne Alchemy’s lab making perfumes and smelling things, reading, or just relaxing and stepping away entirely. In the meantime, Tracy is coming up with ways to expand her career beyond music. “I think it's a time where musicians have to be more creative,” she said. “I have to be an all-around artist – a brand – and not just strictly a musician.” Her foray includes film scoring, storytelling, hosting, writing, voice-over work and public speaking. To that end, Tracy has a  project called The Musical Séance with violinist Paul Mercer, in which she “conjures” music from whatever environment she is in. For example, in New Orleans this past October, the duo did a séance at the Alombrados Oasis of Ordo Templi Orientis.  “It was so beautiful!” she said. 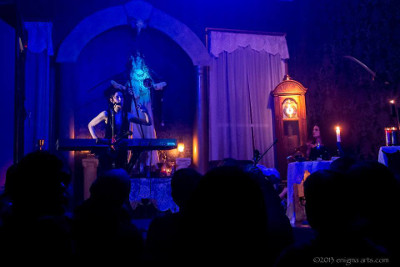 Jill Tracy performs a Musical Séance in the temple of the Ordo Templi Orientis in New Orleans.

Her spontaneous performances have included the seldom-played antique Steinways of the historical (and supposedly haunted) Victoria, B.C., landmark Craigdarroch Castle, an abandoned 1800s San Francisco medical asylum, and the eccentric Los Angeles mansion of a 19th-century murderer. Tracy is the first musician to be awarded a grant from Philadelphia’s famed Mütter Museum to create a series of work based on its spellbinding collection. She spent nights alone amid the Mütter’s grotesque cabinet of medical curiosities, which includes the death cast and conjoined liver of original Siamese twins Chang and Eng, the skeleton of the Ossified Man, Einstein’s brain, and the Mermaid Baby. “When you're writing songs, it's so much about you and your vanity project,” she explained. “But [The Musical Séance] is about sitting in another's presence – dead or alive – and tapping into his story, tapping into the environment. It becomes so much bigger than you. You become a conduit, a recording device capturing these stories and people. That music isn't about me anymore. It's a sense of honoring and archiving a fragile moment in time.” What’s next for Tracy? She and Bauhaus' David J created a “dark classical” piano-led version of the band's iconic hit "Bela Lugosi's Dead." “It’s such an honor,” Tracy said. “If you had told me as a girl that I was going to record a new version of that tune with the man who wrote it, I would not have believed it. This new version really honors the lyrics and ornate Gothic mood. It's extremely cinematic. It even contains a Lord Byron poem.” Her other release is a single called “The Colour of the Flame,” commissioned by Swedish publishing company Malört to accompany its new book, an homage to 19th-century writer-occultist Stanislaw Przybyszewski’s tales. Tracy’s song will be released on a limited-edition collectible 7-inch vinyl record to accompany the book, alongside a new work by Blixa Bargeld of Einstürzende Neubauten and Stephen O'Malley of Sunn O))). Tracy sure is busy, eh? She shared with me a few of her marketing tricks that a lot of different types of artists should find helpful: Mailing list. “One thing that is so crucial is when you do a gig, at your merch table, have an email list! When you perform live, it's so much more than one show. People bring their friends, and they’re people who've never heard of you before. You're trying to get them to learn about you. Your goal is to leave with a lot more fans than you started.” Business cards. “A business card should have a photo or graphic that is unique to you. When I go on tour and to festivals, I might meet 30 different bass players. I'm busy – I just throw business cards in my bag. If I later see that card that just says ‘Jim Smith, bass player,’ I don't recall who that was. I may talk to some really interesting people, but I can't find them because I have this stack of boring white cards. But with a photo, I'll remember you! You'd be surprised at how many people hand you a card with just a name. Make your card distinctive: a die cut or a unique size.” Collaboration. “I really enjoy working with other independent artists. It's this inspiring synergy and getting exposure via each other. It's so important now because artists have to align – all we have is our community. And it's great fun!”