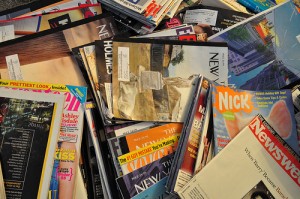 Isn't this caption interesting? Jump down to #3. Case in point. Image via Flickr user ohitsjackiezhou.

Reading magazines is such a fun pastime. If a layout is interesting, it can make a story pop. Some of my favorite magazines in terms of design and layout (not counting design magazines because that would be unfair) are Wired, New York Magazine, GOOD and Real Simple. I also enjoy the consistency in design of magazines such as Vanity Fair , Vogue and the New Yorker. There are many ways in which magazine design can influence other graphic design work on brochures, annual reports, websites, e-mails and newsletters. Let's take a look at some of the intricate elements of magazine design and see how they can work elsewhere: 1. End bugs I call them end bugs, but they are also called end stops and end points. These are the little marks or symbols that denote the end of a story. Many magazines get creative with these little guys - using letters to abbreviate the name of the publication or even mini-logos. Some magazines use a plain old square (which is no fun!) or forgo the end bug altogether for a more serious and stately -- em dash, followed by the writer's name. I would like to see end bugs at the end of brochure copy, e-mail copy or in a newsletter. 2. Information graphics Magazines are full of creative information graphics. Rolling Stoneincludes an annotated timeline along with all of its big political stories. In every issue, New York Magazine runs its approval matrix - a visualization of people and things they approve of and dissaprove of. GOOD magazine also has a wonderful infographics in print and online. I would like to see more information graphics in brochures, annual reports and online. 3. Real captions People read captions. Magazine editors understand this and put the most important information about the story underneath a photograph or illustration. An interesting caption is a way to draw someone who is just skimming into reading the main part of your brochure, or website. At big magazines, captioning is taken seriously. There are even people whose entire job is to write photo captions. Some of these caption writer have master's degrees. 4. Daring typography In the magazine world, typography is treated as an art form, and not just as a means to an end. The first word of a long feature story often contains a drop-cap (the big blown up letter than can span several lines of text). Why not try adding a drop-cap to a brochure? You will also see a lot of feature stories that start on a spread, where the type will span across both pages. I am sure these kinds of bold typographic moves can work in web design, in annual reports and other corporate collateral. Which magazines do you think have the best layouts? Do you ever pull graphic design inspiration from consumer magazines?

[...] Hey, remember magazines? They were like websites and blogs, but they were printed on glossy paper. Ask your parents. Britt thinks graphic designers can learn a lot by reading magazines. Check out her blog post “4 Cool Design Elements from Magazines.” [...]

[...] do this with any item, from clothing to lamps. But what about using glossy magazines? If you are a fan of magazine subscriptions but those issues are stacking up, save yourself a trip to the recycling center and [...]

[…] take a look at some of the intricate and cool design elements of a magazine.Hallo and we will create wallpaper for today. And once again we will combine an […]

[…] do this with any item, from clothing to lamps. But what about using glossy magazines? If you are a fan of magazine subscriptions but those issues are stacking up, save yourself a trip to the recycling center and […]